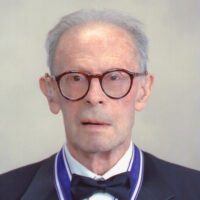 My Life with Mathematics and with Bourbaki

A Mathematical Tapestry Woven from Number Theory and Geometry

Broad Contribution to the Modern Mathematics, Especially through the Foundational Works in Algebraic Geometry and Number Theory

A mathematician who is a giant star of 20th century mathematical sciences, whose remarkable achievements through pioneering works in a wide range of subjects, including number theory and algebraic geometry, have contributed greatly to the rapid development of this field.

＊This field then was Field of Mathematical Sciences.

Dr. André Weil is a renowned mathematician who pioneered research in a broad range of mathematics and has thereby become the most significant contributor to the drastic development of pure mathematics in this century.

Dr. Weil’s own personal contributions are broadly eminent. He conjectured innovative hypotheses and concepts to correlate multiple fields of mathematics and dramatically extend individual fields by breaking down barriers. Examples abound where his works acted as the latent catalysts for many fruitful research studies. Dr. Weil’s penetrating insights and original ideas have played an especially important role in relating number theory to geometry. This served as the basis for many subsequent findings and solutions of remarkable correlations across the traditional boundaries.

In the 1940’s, Dr. Weil completed the foundation for abstract algebraic geometry supported by the abstraction of intersection theory; and utilized it to build the basis for research to relate number theory to algebraic geometry. He then succeeded in inventing a purely algebraic theory of Abelian varieties. This, in turn, led to the proof of the Riemann hypothesis on congruence zeta functions of algebraic curves and Abelian varieties. In 1949, Dr. Weil proposed a detailed hypotheses extending his results on the congruence zeta functions to algebraic varieties of higher dimensions.

This Weil Hypotheses is not a simple generalization, but a formulation born of the deep insights that Dr. Weil had in the topology of abstract algebraic varieties. The hypotheses served as an important guiding principle in later breakthroughs over the entire realms of algebra and geometry.

Dr. Weil also contributed to the development of the field of geometry, by studying the harmonic analysis of topological groups; by analyzing characteristic classes; by building the foundation for Kähler geometry; and by conducting geometric studies of theta functions.

Dr. Weil’s mathematical ideology is pure and universal. His influences are felt in many fields of mathematics. Immeasurable is the ideological influence that Dr. Weil has given to researchers in fields such as functional analysis, several complex variables, topology, differential geometry, complex manifolds, Lie group theory, number theory, and algebraic geometry.

In light of these achievements, Dr. André Weil is awarded the 1994 Kyoto Prize in Basic Sciences.