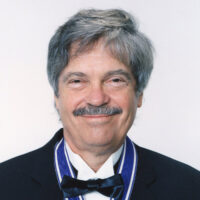 The Center of “Why?”

Future of Personal Computing and Education

In the second half of the 1960s, when the mainstream trend was toward ever larger computers, Dr. Kay proposed the concept of the personal computer as a tool to support the intellectual work of individuals, and so initiated a paradigm shift in the computer world. Furthermore, as a pioneer in the development of the graphic user interface and object-oriented language environment, he has made a fundamental contribution to the realization of today’s personal computing.

Dr. Kay envisaged that computers should be “personal and dynamic media”, and originated the concept and ideals and has contributed to its realization that would be developed into the “personal computer” which is used in a wide range of applications today.

At the end of the 1960s, computers were expensive machines used by specialists and using one of these machines required knowledge of programming languages. Manufacturing efforts focused on producing the largest computers possible. Dr. Kay envisioned “creating a computer to support the intellectual endeavors of individuals,” and so began R&D on what he called the “personal computer.” In the early 1970s, he unveiled his concept for the “Dynabook” machine, which represented the ideal of a personal computer. The Dynabook conceived as a computer that could be used freely by anyone -even children -was portable, could be connected to a wireless network. The idea represented a complete paradigm shift in what a computer was and how it could be used.

To make his concept a reality, Dr. Kay contributed to the development of the Alto personal computer as one of the principal designers at the Xerox Palo Alto Research Center. Alto already had nearly all of the important features common to personal computers employed today. In particular, the innovative interface for visually operating the computer is the origin of the current graphical user interface, that Dr. Kay involved to its design of e.g. over-lapping windows. In the area of software, Dr. Kay led the invention of “Smalltalk,” a programming development environment. The success of programming using an object oriented syntax not only had a major impact on the design of such computer languages, but also made a significant contribution to the general methodology for developing the present-day complex information systems.

Dr. Kay recognized early on that computers could make a major contribution to education, and much of his work has been dedicated to computer education for children, especially small children. He is leading projects to teach school children the basics of software and the thought processes for system construction so that they can learn effortlessly with these. The objective is to carefully guide the children through the stages of development to provide them with the foundation they need to become individuals who can thrive in the information society.

Through his more than 30 years of personal dedication to seeing that vision realized and inspiring its refinement, Dr. Kay has given dreams to computer developers, and has made fundamental contributions to the dramatic expansion of computer applications and to a fundamental transformation of the way we approach intellectual, creative, social and economic activities today.

For these reasons, the Inamori Foundation is pleased to present the 2004 Kyoto Prize in Advanced Technology Category to Dr. Alan Curtis Kay.