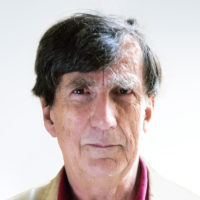 How to React to a Change in Cosmology

Bruno Latour has revolutionized the conventional view of science by treating nature, humans, laboratory equipment, and other entities as equal actors, and describing technoscience as the hybrid network of these actors. His philosophy re-examines “modernity” based on the dualism of nature and society. He has a large influence across disciplines, with his multifaceted activities that include proposals regarding global environmental issues.

Bruno Latour has developed a philosophy that breathes new life into our view of science by treating nature, humans, laboratory equipment, and other entities as equal actors, and describing technoscience as the hybrid network of these actors. At the same time this means that his philosophy re-examines “modernity” based on the dualism of nature and society. Recently, his discourse on overcoming global environmental issues, which expose modernity’s limits, have also received public attention.

Latour, with a background in philosophy and anthropology, has developed new approaches to science studies. He and Steve Woolgar wrote an ethnographic description of the scientists’ activities in a particular laboratory, through participant observation, and opened up a new field called “anthropology of science.” In the 1980s, Latour developed the actor-network theory, a sociological theory that describes technoscience research and development, in collaboration with Michel Callon, John Law, and other researchers, at the Center for the Sociology of Innovation at the Paris School of Mines (ENSMP). This theory describes the production of scientific knowledge as the action of a hybrid network that encompasses activities and equipment other than individual researchers, including social systems, research funding acquisition, laboratory management, laboratory equipment, and experiment samples, which are all treated as actors. This viewpoint revolutionizes the conventional understanding of technoscience, which has strengthened a dualistic conception of modernity that contrasts nature as consisting of inert material beings with a human mind (and a society) that manipulates and encroaches upon it.

Recently, Latour has advocated the necessity of a serious understanding of the Anthropocene for solving global environmental issues as the failure of such dualistic conceptions of modernity. In other words, the anthropocentric concepts of “nature” (i.e., an object influenced by humans) and the “environment” (i.e., an entity surrounding humans) have been identified as extensions of this dualistic idea that is hidden behind modernity, which has resulted in environmental issues and climate change. To move away from this dualistic conception of modernity, Latour has proposed an alternative perspective of the world and nature, which is centered on the “terrestrial” that is interwoven within various Earthbounds, including humans, animals, plants, topographical features, climates, and other material beings in the biosphere (i.e., a thin film that covers the surface of the earth and is several kilometers in thickness). He has suggested the necessity for reorganizing the political and social system by standing atop this “terrestrial” perspective.

Latour, who is influential in anthropology, philosophy, sociology, business administration, geography, and political philosophy, actively collaborates with natural scientists and artists, to share this “terrestrial” perspective with more people. By engaging in such multifaceted activities, he provides an alternative mode of academic activities in the twenty-first century.

For these reasons, the Inamori Foundation is pleased to present the 2021 Kyoto Prize in Arts and Philosophy to Bruno Latour.