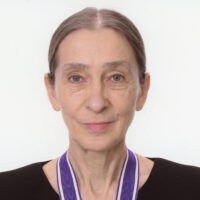 Applying an original choreographical approach that delves into the fundamental motives of human action, Ms. Pina Bausch has established a creative idiom that taps deeply into the sensitivity of both performers and their audiences. At the same time, she has broken down the boundaries between dance and theater, and opened up a new direction in theatrical art.

Applying an original choreographical approach that delves into the fundamental motives of human action, Ms. Pina Bausch is a choreographer and artistic director who has established a creative idiom that taps deeply into the sensitivity of both performers and audiences, and who has broken down the conventional barriers between dance and theater to open a new direction in theatrical art.

Ms. Bausch who has remained vigorously active as artistic director of the Tanztheater Wuppertal since 1973, followed in her early years the precepts of German expressionist dance, which pursues social and human realities, and still she fused new modes of physical and theatrical expression of the modern dance to the German tradition. In her choreography for “The Rite of Spring” (1975), Ms. Bausch faithfully followed the idea of composer Igor Stravinsky, who envisioned the ballet as a dance to the death by a maiden selected as a sacrifice for a rich harvest, and she strongly portrayed conflicting themes such as totality and individuals, brutality and apathy, and ecstasy and fear.

Ms. Bausch continued pursuing the powers that well up from within the human mind and drive the body into action, and established an original theatrical methodology focusing on the significance of and reasons for motion. As evidenced by works since 1976, such as “Café Müller” and “Kontakthof,” even speech, song, and everyday gestures are incorporated as meaningful acts. Coupled with her stage design boldly utilizing the creations of nature in forms such as earth, water, plants, and animals, these innovations brought her to prominence as the originator of “dance theater”. Her creation of “Viktor” in Rome in 1986 was followed by other international coproductions in various cities that continued to reflect her contact with different cultures, view of life and values.

The motifs of Ms. Bausch’s works are solitude and alienation, male-female entanglements, the conflict between individuals and social constraints, and relations between nature and human society. These are precisely the most universal and acute concerns shared by all people these days. Her productions created through close communication with her dancers lasting for as much as a month, directly impact the memory and sensibility of audience and evoke intense reactions that are wholly different from those evoked by conventional performances of dance. Established worldviews collapse, and audiences are confronted with new perceptions of reality and truth. In the process of erasing the line between dance and theater, Ms. Bausch has endowed dance with new possibilities as a medium to mirror the society and times. Moreover, as a result, she has injected a new vitality into not just dance but theatrical art as whole.

For these reasons, the Inamori Foundation is pleased to present the 2007 Kyoto Prize in Arts and Philosophy to Ms. Pina Bausch.

1940
Born in Solingen, Germany
1955
Study at the Folkwangschule in Essen, Germany with Kurt Jooss as director
1959
Study at the Juilliard School of Music, New York on scholarship of the German Academical Exchange Service(DAAD) for the U.S.A., Dancer of the Metropolitan Opera, New York, under the direction of Antony Tudor
1962
Return to Germany. Became member of the Folkwang-Ballett, newly founded by Kurt Jooss
1969
Won first prize at the International Choreographic Competition in Cologne with "Im Wind der Zeit"
1973
Director and choreographer of the newly founded Tanztheater Wuppertal
1983
Director of the Dance Department of the Folkwang Hochschule in Essen
1983
Artistic director of the Folkwang Tanzstudio