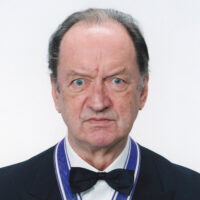 From Marionettes to the Great Orchestras

A musician of exceptional creativity who has contributed to the establishment of the historically informed performance of European early music, and who has extended his principles and interpretation to modern music

Mr. Harnoncourt is a musician who actively seeks to elucidate the cultural facets of European music by studying authentic materials to create the original sound, and who continuously introduces the new interpretation to such early music. He has extended his principles of performing early music further to modern orchestra, and has also been a leading innovator of music filled with energy through his broad repertoire.

Mr. Nikolaus Harnoncourt is a musician who actively seeks to elucidate the cultural facets of European music by studying authentic materials to create the original sound, and who continuously introduces the new interpretation to such early music.

Mr. Harnoncourt, who started his career as a viol (viola da gamba) player, continues his musical activities of unveiling what the composer intended, by studying the historical context of a given piece of music, and not just restoring its original instruments but also investigating the original score and period practice, including performing methods, the customs and musical principles of that period. He interprets that music created prior to the 18th century functioned as a part of live “language” (Klangrede) or as a form of communication in the cultural environment, and he seriously concerned the status of music, such that over time music performance changed in style and lost its former meanings since the public came to prefer superficially beautiful sounds and/or flamboyant techniques. He therefore has endeavored to restore music to the celebrated cultural position it once held through his conducting activities.

Besides being a cellist in the Vienna Symphony Orchestra, he devoted himself to the study of early music and the original instruments. In 1953, Mr. Harnoncourt, with his wife Alice, organized the Concentus Musicus Wien (CMW) to perform early music using original instruments. The CMW originally concentrated on the pieces for ensembles of the Baroque and the Renaissance era. They eventually expanded their repertoire to include the Viennese classics and the Romantics, both choral and orchestral, and recorded numerous works. In 1971, he began recording all of Bach’s cantatas with Mr. Gustav Leonhardt, that was widely accepted as the monumental work in the history of the early music performing movement which began in the early 1960s. As his selected works, we also introduce his opera performances of the triptych operas by Monteverdi being partnered with Mr. Jean-Pierre Ponnelle, a director, in mid 1970s, and his interpretation of Mozart’s and Haydn’s orchestral music cycles with the Royal Concertgebouw Orchestra.

After 1980s, through close works with Vienna and Berlin Philharmonic Orchestra and the Chamber Orchestra of Europe, he has applied his methods of performing early music to modern orchestra, and created music filled with energy, by which he has been highly praised as an outstanding conductor. Moreover, Mr. Harnoncourt performs music not with totally being constrained by the historical context, but with his original vision. Apart from his performing, he is also involved in a broad range of activities, including presenting a lecture series at the Mozarteum University of Music and Dramatic Arts in Salzburg, writing books, and is the founding president of the styriarte — Die steirischen Festspiele.

In summary, Mr. Harnoncourt is a musician who interprets music with broad viewpoints both from its theory and practice, and from its historical context, and a pioneer who has broadened the boundary of music.

For these reasons, the Inamori Foundation is pleased to present the 2005 Kyoto Prize in Arts and Philosophy to Mr. Nikolaus Harnoncourt.