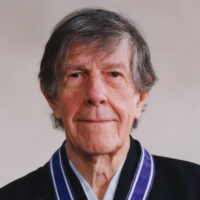 Mr. John Cage, a representative composer of the United States in the 20th century, is known the world over.

A rebel against Western music, Mr. Cage made his brilliant, comet-like debut in the early 1950s, and it is no exaggeration to say that his appearance suddenly transformed all European music into the past tense. Mr. Cage fundamentally denied the past concept which viewed music as merely a vehicle for human feeling or romanticism within strict boundaries of style and manner.

He was never disheartened by the conservative pressures of European civilization. Bold avant-garde art of the Cage kind has been steadily growing in the art of the 20th century. He is, as it were, a prophet who has foretold the spirit of the coming era.

His music by “Chance Operation” has since become one of the major styles in contemporary music. Recalling to people anew that music was originally accompanied by gestures and actions, his performances have had great influence upon the various styles of post-war composition.

His production of sound involving the planned occurrence of casual noise outside musical performances has widened the concept of musical sound as seen in his “Soundscape Theory.” For him, music in the restricted sense of forcing the audience to follow a composer’s thought process in composing a piece was meaningless. He also viewed as nonsense the idea that only classical instruments, such as the violin and the flute, can produce musical sound. For him sound had to be something freely existing and free in meaning, in other words, it had to be very natural sounding.

He studied with Schoenberg for a while to learn twelve-tone music, the influence of which is reflected in some of his works. After being exposed to the influence of Indian musical concepts and to Zen doctrine as taught by Daisetsu Suzuki, he gradually tended to merge into a non-Western spiritual world. In addition to Zen, he thoroughly studied classical Chinese thought, including the sacred texts of the Yi-King. These studies made him aware of another realism that denies the rational theory of pre-established harmony.

His creative activities and philosophy of art have truly constituted a revolution in culture. More than just a musical revolution, they have meant a revolution in conceptual thinking as well as in spirit. This is why he has been so widely influential in fields of culture and thought other than the purely musical.

In this way, Mr. John Cage has stood in the vanguard of change in the post-war Western musical world, and has continually demonstrated his leadership among the most avant-garde group of composers. In this sense, it is most natural for him to receive the Kyoto Prize as a representative musician of the 20th century.