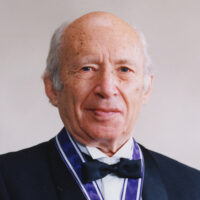 Two Archetypes in the Psychology of Man

Mathematics - the Incessant Search after New Truth and Beauty

One of the highest authorities in modern mathematical sciences. Through his pioneering and monumental work in mathematical sciences, especially in functional analysis-which has experienced tremendous development this century and not only affected other areas of mathematics but has also provided indispensable mathematical tools for the physics of elementary particles and quantum mechanics-he has brought up and inspired many prominent mathematicians in the course of his creative career. He has provided key ideas and deep insights to the whole of mathematical sciences and made outstanding contributions to the advancement of the field.

Through pioneering and monumental works especially in functional analysis, Dr. Gelfand made outstanding contributions to the advancement of mathematical sciences. In the course of his creative career, he also brought up and inspired many prominent mathematicians through collaboration, who, in turn, continue to play leading roles in mathematical sciences.

Functional analysis, which studies infinite dimensional spaces of functions by analytic and algebraic means, is one of the areas in mathematics which experienced tremendous development in this century. Its developments not only affected other areas of mathematics, but provided indispensable mathematical tools in the physics of elementary particles and quantum mechanics as well. Dr. Gelfand played crucial roles in these developments.

His doctoral thesis in 1938 on commutative normed rings and his work on the non-commutative rings of linear operators on Hilbert spaces provided decisive steps for subsequent developments of functional analysis, and deeply affected such areas as algebraic geometry and physics.

Groups, which describe symmetries in nature, are basic objects of study in mathematics and physics. Dr. Gelfand obtained numerous fundamental results on unitary representations of locally compact groups, semi-simple Lie groups and even infinite dimensional groups. His works not only brought about revolutionary changes in representation theory and physics, but had enormous impact on number theory and geometry as well.

The six volumes on generalized functions, published in collaboration with several co-authors, also contain accounts on such diverse topics as differential equations, representations, homogeneous spaces, integral geometry, automorphic functions, and stochastic processes, and continue to be rich sources of inspiration.

The extraordinary collection of over 460 research papers and monographs by Dr. Gelfand also contain remarkable results on the inverse spectral problem, topological invariance of the index of elliptic operators, geodesic flows on homogeneous spaces, co-homology of infinite dimensional Lie algebras, integral geometry, and numerical analysis. The breadth and depth of his achievements cause astonishment.

For over 40 years, Dr. Gelfand has been conducting an extremely creative and inspiring seminar, at Moscow University, which turned out many prominent mathematicians.

Dr. Gelfand is still at the forefront of creative activity in research on hypergeometric functions. Key ideas and deep insights provided by Dr. Gelfand are expected to have lasting influence on the development of mathematical sciences.