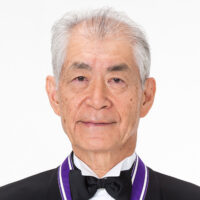 From the Molecular Immunity to the Suppression of Cancer

Dr. Honjo has elucidated the mechanism for the functional diversification of antibodies by clarifying Class Switch Recombination and its responsible enzyme, AID. He also identified several important immunoregulatory molecules, including PD-1, whose function has led to the development of effective cancer immunotherapy. His discoveries and their clinical applications have significantly influenced research in the life sciences and medicine, resulting in eminent contributions to human welfare.