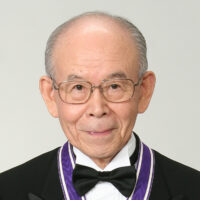 Dr. Akasaki conducted persistent research on gallium nitride (GaN) for many years toward the realization of blue LEDs. His efforts culminated in the pioneering realization of GaN-based p-n junctions, which were once believed to be practically impossible. This achievement served as the first firm step toward the eventual commercialization of blue LEDs. To this day, Dr. Akasaki has consistently played a leading role in a series of significant research endeavors. His contributions to them certainly deserve the highest recognition the world over.