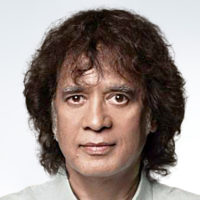 Place：You can enjoy this year’s lectures on the 2022 Kyoto Prize Special Website.

A Highly Innovative and Creative Artist who Opened up the New Musical Possibilities of the Tabla, a Traditional Indian Percussion Instrument

A leading tabla player of Hindustani music, Zakir Hussain transcended the framework of traditional Indian music and opened up a new world of music by collaborating with musicians of various genres from around the world. With his superb technique, engaging performances, and rich creativity, he made a tremendous impact on musicians worldwide.

Zakir Hussain, a leading tabla player of Hindustani (North Indian classical) music since the late 20th century, opened up a new musical world beyond the framework of traditional Indian music by collaborating with musicians of various genres worldwide. His innovative creativity, such as devising a method of playing a melody on the tabla—traditionally a rhythmic instrument of accompaniment—significantly expanded the musical possibilities of the instrument and established the tabla as one of the most popular Asian instruments in the world.

Born in India in 1951, the son of Alla Rakha—who was known for his tabla accompaniment to the renowned sitar player Ravi Shankar, he made his debut in his childhood and received acclaim as a prodigy. He accompanied Shankar on his US tour in 1970 and has since accompanied a succession of prominent Hindustani musicians. He has established himself as one of India’s leading tabla players, bringing out the best in this instrument through his superb technique based on his rich creativity.

Zakir Hussain played a leading role in collaborations with several musicians across genres. His work with guitarist John McLaughlin and the fusion group Shakti, which they formed with Karnatak (South Indian classical) musicians, opened up new dimensions of Indian music. Guiding the younger generation, his collaborations inspired new tabla players around the world. He also participated in percussionist Mickey Hart’s global percussion music creation project, which resulted in the albums Planet Drum (1991) and Global Drum Project (2007), both of which won Grammy Awards. Zakir Hussain has also enjoyed great success in collaborations with Western music, including the world tour of Tabla Beat Science, a musical project involving several tabla players, and a performance with the BBC Symphony Orchestra.

Zakir Hussain has tremendously influenced genre-bending musicians in India and around the world with his superb skill on the tabla, captivating performances, and the rich creativity that backs them. The impact of his activities over the past half a century is immeasurable.

For these reasons, the Inamori Foundation is pleased to present the 2022 Kyoto Prize in Arts and Philosophy to Zakir Hussain.