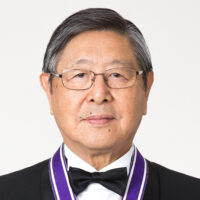 President, Kitakyushu Foundation for the Advancement of Industry, Science and Technology

The Road I Have Taken: Spellbound by the Wonders of Research

Dr. Kunitake was the first in the world to report that synthetic molecules could spontaneously produce bilayer membranes—a basic structure common to the biological membranes of living cells. His innovative research has helped to illuminate the formation of bilayer membranes as a universal phenomenon not only in aqueous but also in organic solvents for amphiphilic compounds with extensive molecular structures. By systematizing a mechanism of synthetic bilayer membrane formation, he helped to establish the new and promising academic field of chemistry based on molecular self-assembly, which is opening new frontiers in the materials sciences.

In 1977, Dr. Toyoki Kunitake became the first scientist to report that synthetic molecules could spontaneously produce bilayer membranes—a basic structure common to the biological membranes of living cells. His subsequent research established the formation of bilayer membranes as a universal phenomenon, observed not only within water, but also within organic solvents for synthetic amphiphilic compounds with extensive molecular structures. He went on to systematize a mechanism of synthetic bilayer membrane formation through his unique organic-chemistry-based research methodology and further developed techniques to immobilize bilayer membranes and to produce self-assembling materials. In so doing, he helped to open up the new and promising academic field of chemistry based on molecular self-assembly.

Dr. Kunitake’s approach to synthetic bilayer membranes was revolutionary, overturning the previously held assumption that ordered molecular self-organizational structures like biological membranes could be formed only by biolipids. His research made it possible, for the first time, to gain a molecular design-based understanding of how molecular organizational structures and physical properties, which are created in a hierarchical manner through self-assembly, correlate with the molecular structures of components. While extending the formation of molecular self-assembly from aqueous to organic solvents, he generalized the conventional image of hydrophilic and hydrophobic portions of amphiphilic molecules, so we can now think in terms of the larger categories of molecular parts that are solvophilic and solvophobic. Dr. Kunitake also showed that specific interactions among functional groups derived from advanced ordered structures appears in bilayer membranes, thereby establishing a fundamental concept of chemistry based on self-assembly: that such interactions on the molecular level as well as their collective functions may be controlled according to molecular orientation and distribution. Furthermore, he went on to lead innovations in materials science founded on this basic research.

Dr. Kunitake’s major achievements include: (1) He developed various methods for bilayer membrane immobilization, thereby enabling the creation of precisely organized membranes. Bilayer membranes immobilized in this way are used to produce super-laminated solid molecular-oriented film electrodes in fully automated electrolyte analyzers for medical use and in-vitro diagnostic testing. (2) He developed a molecular self-assembly-based synthetic methodology for two-dimensional polymer and two-dimensional ultrathin silica films by using organic molecular assemblies as molds. (3) He recently developed a technique for manufacturing large, free-standing nanostructured thin films, approximately 15 nm thick, which possesses notable strength as well as extreme flexibility. These characteristics had long been sought in the functional membrane field and, at present, there are high expectations for their wide-ranging application, including improvements in fuel cells and solutions to environmental problems.

Through these achievements, Dr. Kunitake has expanded the concept of molecular self-assembly-based chemistry which is widely recognized as one of the most useful concepts in advanced materials design and opened a new frontier in the field of materials science using self-assembly techniques. At the same time, he has trained a number of highly accomplished researchers in these academic fields while making significant contributions to international academic exchange.

For these reasons, the Inamori Foundation is pleased to present the 2015 Kyoto Prize in Advanced Technology to Dr. Toyoki Kunitake.