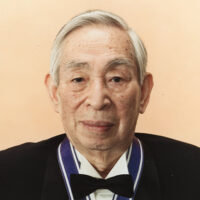 My Sixty Years along the Path of Probability Theory

Fundamental Contribution to the Stochastic Analysis, through His Invention of Stochastic Differential Equations, Which Have Been Applied in Various Sciences

Dr. Itô made great contributions to the advancement not only of mathematical sciences, but also of physics, engineering, biology and economics, through his research in stochastic analysis, especially his invention of stochastic differential equations, which enable us to describe random motions and random phenomena in nature and society.

Through his study of stochastic analysis, especially his original theory regarding stochastic differential equations, Dr. Itô has made great contributions to the development not only of mathematical sciences, but also of physics, engineering, biology, and economics. His theory marked a new epoch in scientific research regarding random motion and stochastic phenomena in nature and society.

Brown, a botanist, discovered the motion of pollen particles in water. At the beginning of the twentieth century, Brownian motion was studied by Einstein, Perrin and other physicists.

In 1923, against this scientific background, Wiener defined probability measures in path spaces, and used the concept of Lebesgue integrals to lay the mathematical foundations of stochastic analysis.

In 1942, Dr. Itô began to reconstruct from scratch the concept of stochastic integrals, and its associated theory of analysis. He created the theory of stochastic differential equations,which describe motion due to random events. Since the advent of his theory, modern stochastic analysis has seen rapid progress.

The stochastic differential equation is an equation of motion that describes the continuous path of motion due to random events; Brownian motion, for example. The solutions define probability measures in path spaces that describe general diffusion motion. Since about 1950, new branches of Dr. Itô’s theory have developed and interacted with the theory of partial differential equations, the potential theory, the theory of harmonic integrals, differential geometry, harmonic analysis, and many other mathematics, as well as with theoretical physics.

Many researchers have so far contributed to establishment of the differential and integral calculus in path spaces. Recently,various attempts have been made to reconstruct differential geometry, and the theory of asymptotic expansions. Dr. Itô’s theory has survived, and continues to serve as the basic method of stochastic analysis.

Nowadays, Dr. Itô’s theory is used in various fields, in addition to mathematics, for analyzing phenomena due to random events. Calculation using the “Itô calculus” is common not only to scientists in physics, population genetics, stochastic control theory, and other natural sciences, but also to mathematical finance in economics. In fact, experts in financial affairs refer to Itô calculus as “Itô’s formula.”

Dr. Itô is the father of the modern stochastic analysis that has been systematically developing during the twentieth century. This ceaseless development has been led by many, including Dr. Itô, whose work in this regard is remarkable for its mathematical depth and strong interaction with a wide range of areas. His work deserves special mention as involving one of the basic theories prominent in mathematical sciences during this century.

For these reasons, the Inamori Foundation is pleased to bestow upon Dr. Itô the 1998 Kyoto Prize in Basic Sciences.