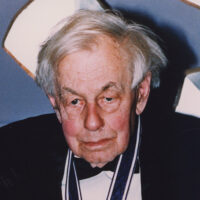 Ecological Play on the Earth -The Ecological Niche and Related Problems

A leading figure in the advancement of the discipline of ecology, whose preeminent and foresighted ideas have been influential over a wide range of special fields and have inspired many disciples. He has contributed to the establishment of a comprehensive limnology, integrating both biology and physico-chemistry based on research in various lakes and ponds around the world.

Ecology, which is the synthetic study of organisms and their environment, was established in the last century as a part of modern science. Through this century, its research targets have been drastically expanded, and its methodology has been rapidly developed. Today, the importance of ecological research is widely recognized.

Prof. Hutchinson introduced many fundamental ecological ideas, and his thoughts have influenced a wide range of ecological researchers, including many distinguished disciples of his own. Particularly since the Second World War, Prof. Hutchinson has been regarded as a preeminent figure among ecologists in the United States. Among his impressive list of achievements, especially notable is his scientific analysis of ecological niches and species diversity in biotic communities, which provided an important foundation for the later development of ecological theories.

In the early days, Prof. Hutchinson was primarily known for his contributions to the advancement of limnology by integrating biological and physiochemical studies based on field work in various lakes and ponds around the world. In collaboration with E. S. Deevey, Prof. Hutchinson theorized a process of sediment accumulation at the bottom of lakes, and developed paleolimnology within the discipline of paleoecology.

Prof. Hutchinson also contributed to the development of the production ecology introduced earlier by A. Thienemann, which is the study of ecosystems from the point of view of biological production. He then contributed to the establishment of the trophic dynamics theory, with special reference to the efficiency problems of energy transmission among various trophic levels in an ecosystem, by guiding R. L. Lindeman, who was one of his students.

After the war Prof. Hutchinson advised E. P. and H. T. Odum, brothers who profoundly influenced ecological research in Japan, and laid the foundation of ecosystem ecology, which is the study of the biotic community and its biotic environment as an integrated system from the point of view of energy transmission. It was also Prof. Hutchinson who encouraged a mathematical ecologist, R. H. MacArthur, to study theoretical ecology, especially the mathematical analysis of population dynamics with reference to interspecific interactions such as competition and predation.

Besides Prof. Hutchinson’s guidance and influence on younger researchers, his own “theory of ecological niches” laid an indispensable foundation for the further development of ecology. The concept of niches was introduced earlier by J. Grinnell and C. S. Elton, but Prof. Hutchinson defined it more strictly in a measurable form as made the distinction between “fundamental niche” and “realized niche,” and made it possible to show the effect of interspecific interactions by measuring differences between the two.

Prof. Hutchinson bridged the gap between population ecology and community ecology, which are the two major aspects of contemporary ecological science. This work laid the foundation for the development of modern functional ecology and evolutionary ecology.