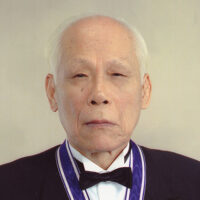 Astrophysics and I—Motivations, Methods, and the Outline of My Research—

The Formation of Stars and the Solar System

An astrophysicist who introduced the knowledge and methods of fundamental physics into analysis of astronomical phenomena, applying scientific principles from such fields as nuclear physics and fluid dynamics. Through studies of stellar evolution and the solar system, he developed theories explaining many astronomical phenomena and contributed immeasurably to the maturation of modern astrophysics.

By introducing the knowledge and techniques of the broad area of basic physical sciences of atomic nuclei and hydrodynamics to the analysis of the universe, Dr. Chushiro Hayashi has opened a new phase in research into the evolution of stars and the origins of solar systems with his theoretical explanation of various phenomena of celestial bodies, and has ultimately made an enormous contribution to the development of modern astronomical physics.

Astronomical physics is the science of studying and analyzing those heavenly bodies, such as planets and stars, with which we are so familiar. The evolutionary time schedule of celestial phenomena, however, is extremely long, and observations that are made can be considered merely as snap shots of the various evolutionary stages of the universe and its components. Dr. Hayashi has taken these countless “snap shots” and theoretically analyzed them under the light of basic physics to determine their sequence and construct a consistent, theoretical model for the formation of the stars and their evolutionary processes. His achievements in the field have received the very highest acclaim from all over the world.

Dr. Hayashi has been involved in the general analysis of the evolutionary processes of the stars since the 1950’s, and is recognized for numerous innovative achievements related to theories of star formation. In the area of stellar evolution theory, Dr. Hayashi has, based on his theories concerning the internal structure of stars and atomic nuclear reactions, succeeded in explaining the composition and development of heavenly bodies such as main-sequence stars, giant stars and white dwarfs. In particular, his paper entitled “Evolution of the Stars,” which was published in 1962, has long been considered the leading authority and reference for astronomical researchers working on the evolution of fixed stars, and it would not be an exaggeration to say that the theories developed through his research have completely explained the main points of the field. In the area of stellar formation theory, he discovered a period of stellar development which occurs during the birth of star; a period of extreme activity when the brightness of the star reaches a luminosity-several tens of times brighter than even that of a main-sequence star. This phase, when a star is in the process of being born, has been termed the “Hayashi Phase,” the first and only time a concept in the science of astronomy has been crowned with a Japanese name.

In the field of solar system formation theory as well, Dr. Hayashi has theoretically analyzed how the planetary systems and fixed stars of solar systems such as our own are born. With his model for the origin of solar systems, known as the “Kyoto Model,” he has made important contributions in the area defined by astronomy and earth planet sciences. Recently, with the rapid progress of radio wave, optical and infrared telescopes and detection equipment, observations in the area of planetary system formation in solar systems other than our own have become possible, and among the resulting deluge of new data and information have been numerous finds which have further verified the model that Dr. Hayashi originally constructed.

The achievements that Dr. Hayashi has realized through his research and investigations have fundamentally brought about a new, standardized level of knowledge and understanding to astronomical physics. The consistent theories that he has successfully developed concerning the stars and planets have established him as a giant in the field of physical astronomy, and a representative of this century. Also widely acclaimed for his influence and guidance of numerous bright young researchers in the field, Dr. Chushiro Hayashi is truly worthy of the 1995 Kyoto Prize for Basic Sciences.